What is plaque halo?

Plaque halo refers to the partial-turbid clearance surrounding the original phage-induced clearance of the bacterial lawn. Not every phage infection can cause the formation of plaque haloes. According to research, the halo around phage plaques appears due to bacterial polysaccharide capsule reduction or disappearance. Within the halo, the concentration of viable bacteria remains constant. As a result, the enzymes’ primary function is to provide accessible roots through which bacteriophages can enter the bacteria’s cell wall. The presence of a halo indicates that the phage can pass through polysaccharide-based barriers such as biofilms. 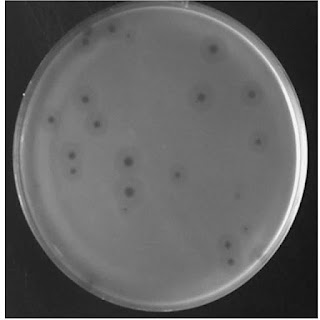 How do halo regions look?

Halos appear translucent with less turbidity than the bacterial lawn region and less clear than the phage clearance zone. This layer usually follows the shape of the original phage-cleared zone (Refer to the photo above)

Do halo regions have phage particles?

Plaque halos, in particular, are devoid of phage particles or phage infections. Enzymatic activities purely trigger their formation. These proteins (enzymes) are released from the phage-induced clearance zone. Although some phage particles may be tested in the plaque’s vicinity. However, the presence of viral particles may indicate that lysis has occurred. As a result, the number of bacteria may have decreased and not remained constant. Plaque halo and turbid plaque are very similar in appearance, except that the plaque halo does surround the clear plaque. Something that the turbid plaques lack.

The diffusion and subsequent enzymatic action, especially of soluble (not virion-associated) phage-produced EPS depolymerase, causes halo formation. In comparison to the phage particles, these enzymes are substantially smaller; hence, they can diffuse further into bacterial lawns.

Are phages with halos bad or good for phage therapy?

Up to now, phage scientists have not found any negative impact that depolymerase enzymes might initiate once those phages are used in therapy. Some scientists have taken it to an advantage and tried to extract these enzymes as possible antibacterial agents by themselves (Read about phage lysins).

Halos often form following plaque formation, and indeed can develop during plate refrigeration. This occurs because halos, as noted, are not a direct consequence of phage population growth but instead of extra-virion diffusion and virion-free enzymatic degradation of bacteria. Furthermore, that degradation is not of the bacterium as a whole but instead of just exterior layers that are bacterium produced and associated.

(Visited 146 times, 3 visits today)
Last modified: January 9, 2023
← Previous Story
How does a phage based vaccine work?
→ Next Story
How are bacteriophages (phages) produced?

One Reply to “What Causes Phage Plaque Halo?”